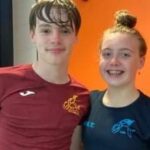 Three Fins swimmers were back in competitive action last weekend at the Royal Commonwealth Pool in Edinburgh. The occasion was a British Swimming initiative involving swimmers from Scotland, England, and Wales.

The Summer Festival of Swimming was designed to allow age group and senior swimmers to compete following the long layoff. All the events will be held in different areas of the countries involved, to avoid excessive travel, and there will be a common programme throughout. Scotland were the first of the countries to kick off the event with competitions being held at the Royal Commonwealth Pool, Edinburgh; Tollcross International Centre, Glasgow, and Aberdeen Aquatics Centre. Once the swims were completed the results were collated to give the finishing places for Scotland. This process will be followed over the coming weeks in England and Wales and will culminate in a leader board covering all three countries.

All three Fins swimmer should be pleased with their performance, especially as they have not competed for around 16 months and with very little training during that period, although it is now being stepped up.

There were no medals awarded, simply a place on the leader board and top placed swimmer for Fins was Erin who was 2nd in the 200m Breaststroke, just beaten by Nula Gow of Garioch, who was competing in Aberdeen. Erin’s time of 2 min. 42.59 sec. was a Fins’ club record beating the previous time, also set by Erin in the Scottish Summer meet in July 2019, by 1.37 seconds.

In terms of improvement Mark had an exceptional weekend, achieving PBs in four of his 6 swims and in the two swims where he didn’t show an improvement, he just missed out by 0.05 seconds in one and 0.45 seconds on the other. Mark gained three 4th placings in the 200m and 400m Individual Medley and the 200m. Breaststroke. He was also 5th in the 200m Freestyle and 9th in the 100m Freestyle.

Mark’s top improvement was 14.74 seconds in his 200m Breaststroke. His 400m Individual Medley was the first time that Mark had competed in this event, long course, but bettered his short course time by 12.59 seconds. Mark’s two other improvements were 10.12 seconds in the 200m Freestyle and a very good 2.16 seconds in his 100m Freestyle.

Neža, gained a top 10 finish in her 400m Freestyle, finishing in 9th place.. Neža, has been out of the water longer than most of Fins top squad so this meet provided a good baseline going forward.