The Scottish National Open Championships were held in the Aquatics Centre at the Aberdeen Sports Village from Thursday through to Friday, 27 – 30 June, and attracted a large entry from throughout the UK and Eire. There were also a number of Scandinavian Teams, including the Danish National Youth Team, plus a team from Greece.

This was not a targeted meet for Fins but two senior swimmers opted to compete, with relative success.

Arran Stowe competed in six events and recorded three PBs including two Fins’ Long Course records. Arran’s top swim came in the 400m Freestyle where he qualified for the ‘A’ final finishing in 10th place, beating his own club record, set at the University of Aberdeen Age Group Meet in April. Arran’s time of 4 minutes, 14.76 seconds reduced his previous time by 0.79 seconds. The event was won by Kyle Chisholm of Stockport Metro, a GB internationalist who won two silver medals in the European Championships in Baku in 2015.

Arran’s second record came in the heats of the 200m Freestyle where he qualified for the ‘B’ final in 8th place, but he chose not to compete in the final. Arran’s time of 1 minute 59.00 seconds was a 1.24 second PB, and a 0.95 second improvement on the previous record set by Greg Watson at the Scottish National Age Group Championships in March 2012. He now becomes the second Fins’ swimmer to go under the 2 minute mark.

Arran’s third PB came in the 50m Freestyle where his time of 25.97 shaved 0.13 seconds off his previous best. 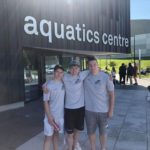 Fins’ other swimmer was Euan Pate who competed in just one event, the 200m Butterfly, where he narrowly missed out on a PB. This event was won by an Anglo-Scot, Tom Beeley, who has represented both Great Britain and Scotland.

Kyle Pate, who is still retain his Fins’ membership finished 9th in the ‘A’ final of the 50m Backstroke, swimming for the University of Stirling, where he is currently a student. 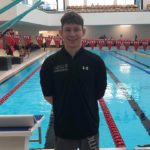