The Edinburgh International Swim Meet went ahead at the Royal Commonwealth Pool, Edinburgh from Friday Morning through to Sunday evening, despite coronavirus concerns and attracted the top swimmers throughout the UK and some from Europe. The exception was the Irish Swim Team who decided to withdraw.

The standard of Swimming was excellent for this time in the season with some outstanding swims.

Adam Peaty, Loughborough National Centre, World record holder in the 50m and 100m Breaststroke, and current Olympic Champion, who swam the fastest time in the World this year for the 100m breaststroke in a time of 58.13 seconds.

Duncan Scott, University of Stirling, who set a new Scottish record for the 50m Freestyle in a time of 22.21 seconds. Duncan also won the 100m Freestyle.

Kathleen Dawson, University of Stirling, whose father was raised in Dunnikier Estate, and then Raith Estate, had a trio of wins in the 50m, 100m, and 200m Backstroke with her 50m backstroke time of 28.07 seconds setting a new meet record.

Fins also had two junior swimmers at the event, but with mixed fortunes. 17 year old Theo Goodfellow, 15 to 18 boys, set a new Fins’ club record for the 200m breaststroke in a time of 1min. 27.10 seconds, beating his own record, set at the Scottish National Age Group Championships, in Glasgow in 2018, by 1.84 seconds. 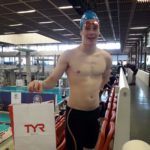 The other swimmer was Erin Taylor who unfortunately did not perform at her usual high standard.  Although she did finished as 5th Scot in the 200m butterfly; 8th in the 200m breaststroke; and 9th in the 400 individual medley (14 – 17 age).

It now looks as though swimming, certainly at national level, will be affected with the Scottish National Age Group Championships, that were due to take place from 1st to 5th April, at the Aquatics Centre, Aberdeen Sports Village, being postponed, with the Scottish East District Open and Age Group Championships due to be held at the Royal Commonwealth Pool, Edinburgh on 25th and 26th of April likely to suffer the same fate.