Fins’ swimmers have been in action over the past two weekends with both meets they were involved with taking place at the Michael Wood Centre, Glenrothes,

Last Saturday nine swimmers competed in the first round of the Scottish East District Age Group Championships which was the sprint event, with all swims contested over 50m, and although Fins’ swimmers are not noted for winning medals at sprint events, this year they managed to achieve four bronze medals with almost a couple more. 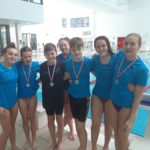 The four swimmers who won the medals were:

Mark Scott, 14 boys, who won the bronze in the Breaststroke. Mark was 4th in the Butterfly but was at the wrong end of a three-way battle for the silver medal where he finished just 4 one hundredths of a second from the silver and 3 one hundredths from a bronze. He also finished 8th in the Freestyle.

Neža Dolenc Luznar, 16 girls, won bronze in the Freestyle and she also just missed out on a bronze by 9 one hundredths of a second, taking 4th place in the Butterfly.

Kristin Mackay age 10 competing in the 11/12 girls, won bronze in the Butterfly and was 1st reserve for the final of the Backstroke.

Erin Taylor, 15 girls, was the only other swimmer to achieve a top 10 finish gaining 6th place in the Breaststroke.

The remaining swimmer was Nicole Reynolds, 17/O girls, who qualified for the final of the Breaststroke in 7th place but did not swim.

The top two improvements came from Steven in his Breaststroke, reducing his previous best by 2.99 seconds and Nicole who reduced her Backstroke by 2.08 seconds.

The previous Saturday and Sunday eight swimmers competed in the Carnegie Winter Open Meet, which included a team from Gateshead and Wickham. Some of the swimmers were a bit rusty after the October break but there was still a creditable 60% overall improvement, with the top two improvements coming from Steven Pate who reduced his 100m Freestyle by 3.52 seconds and Mark Scott who reduced his 50m Freestyle by 1.99 seconds.

Fins’ swimmers had a total of 32 swims which resulted in one silver and one bronze medal, plus a further 18 top 10 placings. 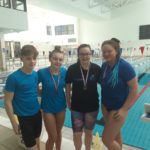 The bronze medal was won by Nicole Reynolds, 17/O girls, in the 100m Breaststroke. She also qualified in 3rd place for the final of the 100m Butterfly but opted not to swim. Nicole also finished 7th in both the 50m Freestyle and 100m Individual Medley.

The remaining top 10 placings were –

The remaining swimmer was Blair Wardlaw, 15/16 boys, who unfortunately just missed out on a top 10 placing.