Last weekend was yet another successful one for Fins’ swimmers, Eight qualified for the 4th and final round of the Scottish East District Championships, held at the Royal Commonwealth Pool, 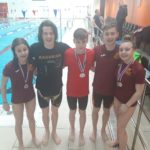 Edinburgh. They competed in twenty six swims returning one title, three silver and one bronze medals, plus 9 top 10 placings. Again, there was considerable improvement with 17 swims resulting in a PB.

Top improvement came from Kristin Mackay who reduced her Long Course 100m butterfly by 12.87 seconds.   Two other improvements just missed out on double figures and they came from Ben Lewis who reduced individual medley by 9.47 seconds, a 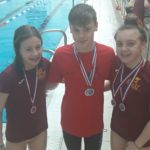 nd Steven Pate who reduced his 100m breaststroke by 9.36 seconds.

Erin Taylor, 15 years girls, took gold in the 100 breast stroke – she achieved this with a 0.97 second PB. Erin also won a silver medal in the 200m individual medley, and finished 7th in the 100m butterfly and 10th in the 100m freestyle.

Mark Scott, 14 boys, continued his outstanding improvement since the start of the year by setting PBs in all his five swims. He won two silver medals for the 200m individual medley and 100m breaststroke.  In the final of the 100m fly Mark was leading a highly competitive final but was dqd due to a technical infringement.  Mark finished 4th in the 100m freestyle and 7th in the 100m backstroke.

The bronze medal was won by Kristin Mackay, 11/12 girls, in the 200m individual medley. Kristin also finished 4th in the 100m butterfly and 5th in the 100m breaststroke.

Three more swimmers achieved a top 10 finish and they were:

The two remaining swimmers were Nicole Reynolds, 17/O, who qualified for the final of the 100m breaststroke in 7th place, but chose not to compete, and Euan Pate, 17/O who finished just outside the top 10.