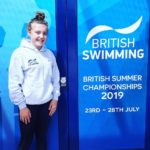 Erin Taylor was in Glasgow for the British Summer Championships, which ran from Tuesday morning until Sunday evening. Entry to the Championships is by invitation only and is restricted to the top 24 swimmers in each stroke and age group. Erin qualified for two swims, the 400m Individual Medley and the 200m Butterfly, in the 13/14 years girls age group, and she had an excellent swim in the Individual Medley with a 3.14 second PB. Erin just missed out on the final, finishing as 1st. reserve (11th overall) and her improved time meant that she moved up the British 14 years girls’ rankings from 20th to 13th.

Erin was just outside her PB in the 200m Butterfly and finished 16th overall. However, no one lower down the rankings beat her previous best and her British ranking for this event remains at 16th.

Erin finished as top Scottish Swimmer in both events, and is ranked 1st, 14 year girl, in Scotland, for these events.

The other swimmer in action was Arran Stowe who was at Loch Morlich, on Saturday, competing in the Scottish North District 5k Open Water Championship where he had to settle for a silver medal, on this occasion, with Struan Kingdom of REN 96 taking the gold. 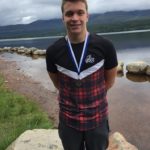 With both swimmers having two wins and a second place each they are both on 70 points, in the Scottish Grand Prix, and it will now be down to who comes out on top at the Scottish Championships in August, where four events are contested and, perhaps the West District Championships in September, where one event will be contested. The winner is decided by their best finish in four of the eight counting events.